There are several reasons for foresters to be aware of and understand public access instruments.

The main instruments are roads, marginal strips, and public access easements. A complete list of the most likely instruments is attached as Appendix A.

Roads provide the public with the right of free passage. There is no difference in the legal rights of members of the public to use unformed legal roads, colloquially referred to as ‘paper roads’, and formed roads maintained by councils (or NZTA.)

Local territorial authorities, such as district councils, are responsible for administering legal roads other than state highways.

Legal roads are separate parcels of land. This means that unformed legal roads (ULRs) are not ‘over’ or ‘across’ a title, but the road parcel may intersect or dissect a title.

The Local Government Act 1974 specifies that:

Neither the council as the statutory owner of the road nor the adjoining owner as de facto occupier may exclude anyone else from using the road. Under the Summary Offences Act 1981 (s 22), it is an offence to obstruct a public way. 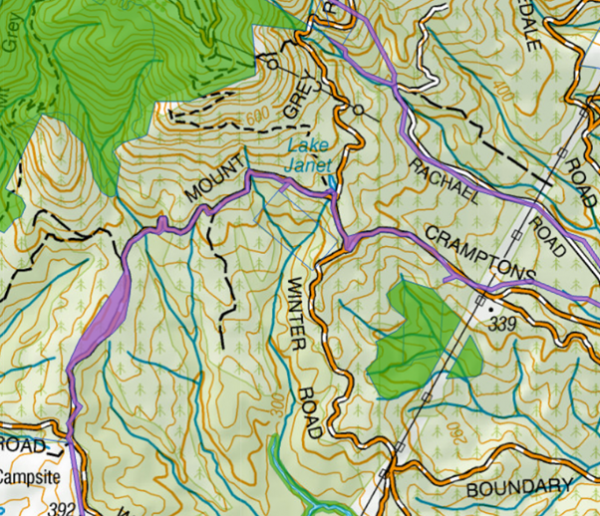 ULRs can also provide public access alongside waterways associated with many properties. For example, see Map 2 below. 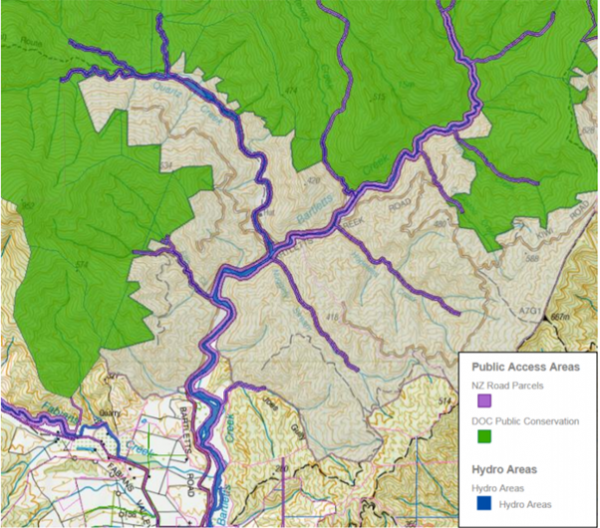 ULR are fixed parcels and therefore do not move with the associated water body, which can mean that there may be a physical separation between the public access and the actual water body.

Marginal strips are 20m wide strips of public conservation land (Part 4A, Conservation Act 1987) that may adjoin waterways. They have been reserved from sale when Crown land has initially been sold. Two of their purposes are to enable public access to adjacent watercourses (or bodies of water) and public recreational use. The Department of Conservation is responsible for marginal strips.

Many properties have public riparian access by way of marginal strips. Some have been surveyed and are recorded in the cadastre. For example, see Map 3 below. 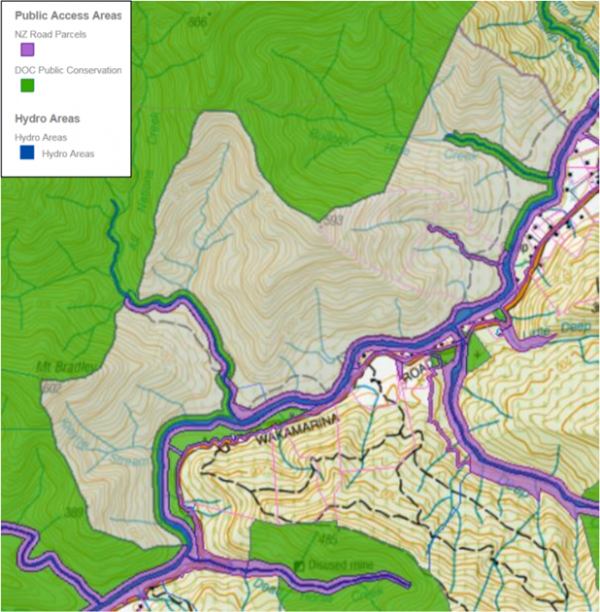 However, many marginal strips are not recorded in the cadastre, and a title search is required to verify whether or not the title is “Subject to Part IVA Conservation Act 1987”. For example, see figure 1 below. 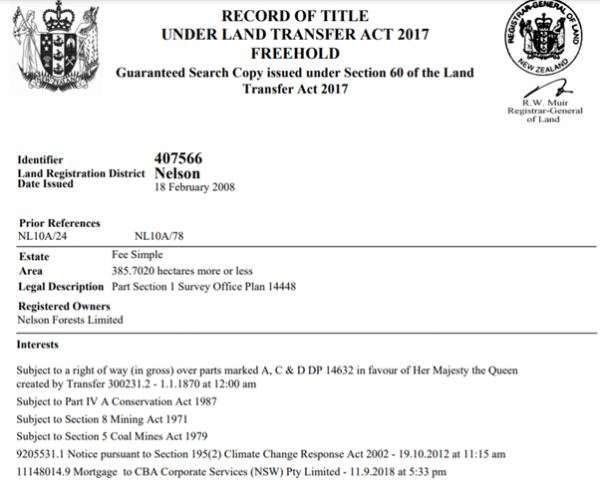 Where a title is annotated as above, any waterway with an average bed width greater than 3 metres has a 20m marginal strip adjoining it. To determine whether a waterbody has such a marginal strip technically requires a surveyor to determine the bed’s average width using guidelines from DOC. However, it may be obvious in many cases.

The purpose of PAEs is to permit and allow access by the public over and across the identified land, constrained by the perceived needs of the forestry operator. The PAE documents generally provide that the owner may close or otherwise restrict the use of the access during the hours of darkness for reasons relating to the safety of those using the access or those working on the land and for reasons relating to the protection of the trees, buildings, plant, equipment and related items on the land. The owner is not required to maintain any road, track or other access way the PAE may be over, when it is not required for their use.

All PAEs have been depicted on survey plans. For example, see figure 2 below and registered on records of title as an interest. An example of a record of title for a Crown Forestry Licence is attached as appendix B. 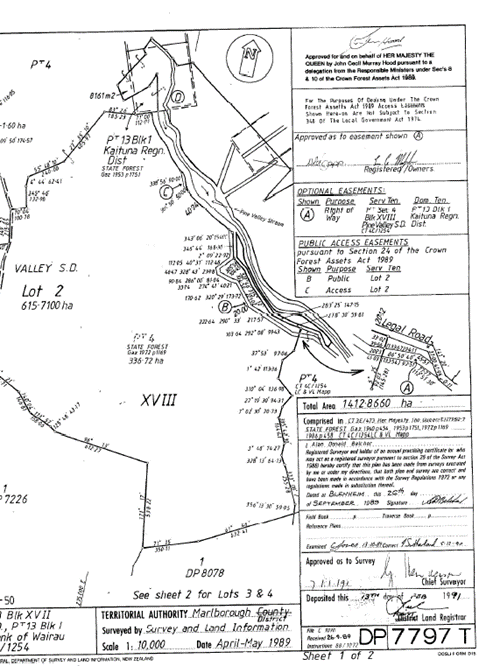 The above PAE is an example of one depicted in the cadastre and represented spatially (highlighted pink) as shown on map 4 below.

However, many PAEs have not yet been entered into the cadastre and therefore have no spatial representation.

There can frequently be apparently conflicting interests between the public seeking access rights for tramping or mountain biking, for example, and forest managers with legitimate concerns regarding fire risk and health and safety, especially during planting and harvesting. Many conflicts can be perceived rather than real, and many others can be mitigated by appropriate consideration and compromise. Precise and accurate signage can be an effective tool to mitigate potential conflicts. A good example is one recently implemented by OneFortyOne Plantations in Nelson. For example, see figure 3 below. 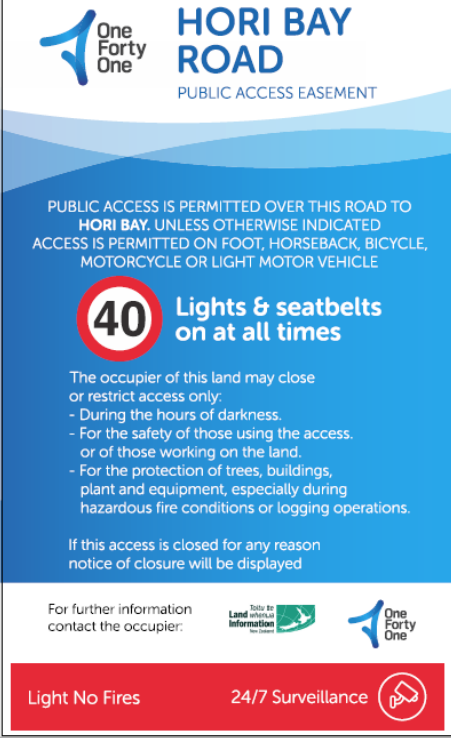 Appendix A: Principal Forms of public access that may be associated with forestry blocks

Appendix B: Example of record of title for Crown Forestry Licence with PAE  highlighted yellow 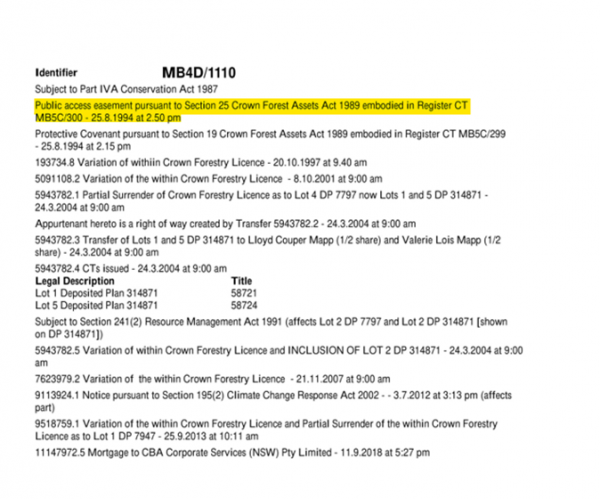