Ric Balfour from Landcare Trust and Felicity Brough from Walking Access Commission have formed a partnership to help farmers and catchment groups develop public access routes when riparian planting. Felicity and Ric’s work is important because there is a strong link between good public access to land and healthy environmental outcomes. For more information about riparian planting and public access, visit the Landcare Trust and Walking Access Commission websites, especially:

RB: “Yes. Hi, my name is Ric Balfour. I’m the Waikato Catchments Coordinator with New Zealand Landcare Trust. And I’m based in Thames, and my role is working with farmers, landowners, catchment groups and iwi to move everyone further along the dialogue of more sustainable land use. And it could be anything from water quality testing programs that people want to start up, or just investigate what’s happening in their stream, because they’re thinking about doing a riparian restoration project, or a wetland project.”

FB: “So we work with Landcare Trust when they are working with community groups, to help the community groups understand the nature of the land or the ownership of the land that they’re seeking to put riparian restoration work over. So one of the important things is that people understand who owns what land. It’s easy for farmers, while they might have historically been farming in an area, to assume that they own it or have the right to work on that land. And sometimes that’s not the case.”

A great example of how this works is the Waipā Rerenoa Catchment Group:

RB: “And that’s a catchment group doing an incredible job working with farmers along the Waipā stream. And they’ve done already quite a lot of fencing and planting. And in the process of looking at more things that they could do along the corridor, they realised that public access or the potential for a community trail, even just for the pragmatic reasons of doing the work on the restoration, they hadn’t factored in access—walking or a clear area inside the fenced area that they’ve planted or want a plant that would provide continuity of access that wouldn’t involve going in and out of every single farm and getting permission or dealing with stock and gates and all that. So when Felicity and I heard about this at a forum of catchment groups, we realised there was an information gap. And that we could help them navigate the legal side of it, to understand it. And with my restoration background and my trail building background, there was a good match for Felicity and me to work together to help unpick the situation and help them through how to do a better job of planning for access, even if it was just purely pragmatic, getting the job done of restoration and maintenance of the project, let alone any potential future community access as a public right of way.”

FB: “So my role there was just to highlight that they might need to consider different aspects on the land ownership — were there covenants on the road, or the land that’s owned, public land, and the implications of putting a trail over that public land. So it was really about raising awareness and understanding the implications, whether there is land outside the farmer’s control or there are other parties that have an interest in it.”

Felicity and Ric’s work is important because there is a strong link between good public access to land and healthy environmental outcomes.

RB: “Yeah, so that’s the neat thing about some of these riparian projects, that catchment groups and farmers are starting to get cracking on. And one of the most important things is for us to be very practical and helpful in the way they think about their project before putting the fence in the ground. And before they put the plants in the ground. And factoring in the need for maintaining a grass corridor between the fence and, say, the first plantings. Because grass in itself is a really good filter, and see if you think you’ve got a slope above the stream and the cows or stock or whatever’s going on, on that hillside, you’ve got nutrients, or potentially silt coming down in rainfall events. And if it’s got a nice sward of grass between the fence and the active part that the farmer is managing and the first plantings and the stream, then that grass acts as a really good filter. And it doubles for other cool things like your planting project to get access without going up and down and in and out of gates and different properties. And it maintains a place for your follow up maintenance, whether it’s weed spraying or replacing lost plants. Many of these catchment groups are trying to improve the habitat for the long term. So they’re doing pest control. And if you’ve got a corridor of traps and a pest-control volunteer group and this grass strip that’s maintained as access, easy peasy, you know, they can get their job done. And there are other benefits, things like occasionally a stock breach will happen, and cows will be in the riparian zone. And they’ll hang out in that grass strip rather than being lost in the scrub or regen, or down in the creek, which is worse.”

“And even in the Waipā Rerenoa project, we heard about 15 head of cattle that had spent three weeks unbeknownst to people along the stream corridor because they couldn’t see down into the creek. And those cows were in there for a while before the farmer detected them. And so we try to reach out to the farmers and give them really good practical reasons why leaving that access corridor along the riparian corridor was a good idea from just the farming point of view, but also from the catchment group or the volunteers’ point of view of keeping that corridor maintained and functioning and improving the biodiversity.”

RB: “I would say between Walking Access Commission and Landcare Trust, we can help catchment groups or landowners individually, figure out what their options are, what their legal obligations are, and keep making sure that they’re planning and keeping their options open.”

FB: It’s also helping them to avoid frustration. There’s nothing worse than doing work and then finding that you are planning to do work, that you have to unpick it. So we want to make sure that the basic research is done before they start committing resources. No one wants to have to move a fence. They are very expensive. And if you find that you have to move it, it’s very frustrating.”

RB: “That a lot of the times when I’m going onto a farm and helping a farmer deal with this question, or where the catchment group that’s visiting a farm that’s either done some work or wants to do or extend it is, you know, electric fences. And when you factored in, you know, an access corridor into your project, or when you’re thinking about your fence placement, before you even get started. Putting in those gates, putting in the corridor where it’s not going to be planted, makes life so much easier for both the farmer for any volunteers for any tour groups because other catchment groups want to come and have a look. And there’s been quite a few times where I’ve had the gentle reminder that’s a live fence. And we’ve had to walk out of our way to get to a place we wanted because there’s no gate or there’s no easy way to turn off the heat on the fence. And so that’s all part of the practicality of thinking ahead and planning. So that life is a lot easier when you’re doing the project or when you’re doing your follow up or just showing off your good work."

FB: “A lot of these areas that people are planting are the beautiful areas, and they want to share them with school groups, people from town that are learning about farming, so by putting in walking track, they’re able to share it easily. And their friends and their family can enjoy more and easily access the river for recreational use.”

RB: “We say to the farmers, think about the placement of that fence. Often it’s right in the middle of the track. And we say put it to one side, preferably uphill. And then you’ve got that platform that you can then create as your access track ongoing in the future. And then, anytime a track goes in and crosses a small tributary or gully, we remind farmers to think about when there’s that rainfall event that could be a clever silt trap. And so, think about the culvert placement being perched enough to allow the silt to settle out before going straight into the stream. So there are lots of little practical ways that we can help in the broader topic of planning for access along your riparian corridor."

SD: "It sounds like as well as the access and environmental benefits that we’ve discussed from these kinds of projects, there are a lot of connections happening between farmers and the communities they live in and the groups that have an interest in that land."

FB: “There’s been a lot of strengthening of social connections within the farming communities. The other thing, Ric, is my observation is there’s been a better understanding or greater awareness and interest in biodiversity. And providing access to that is helping farmers and everybody understand what lives on our waterways and being able to see this — freshwater mussels, koura. And what exactly is the fish life? What are your thoughts on that?”

RB: “Yeah, definitely. And I’m excited to see that positive shift instead of maybe a NIMBY attitude that might have prevailed and sometimes comes up. But people are willing to say, ‘I’m okay with that, you know, potentially being a public access corridor one day, so we set that option up in the future in their thinking. It doesn’t make them have to do anything right now. But suppose they’re planning to place the fence and the planting boundary. In that case, they’re keeping that option in their back pocket and often, as I said, you know, you got tour groups or community groups, their catchment group, neighbours, or just their own family getting down to the creek and enjoying to see, you know, the progress of the work that they’ve undertaken. All those factors are coming into it to make it worthwhile.” 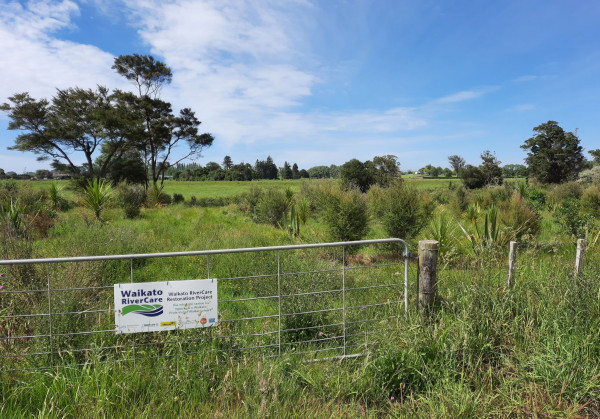