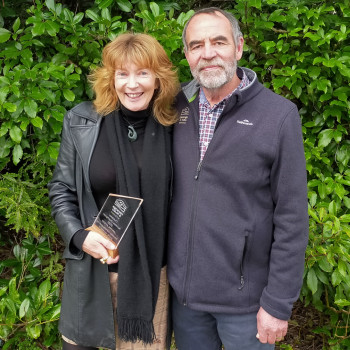 She’s the force behind Federated Mountain Club’s (FMC’s) Same as SH1 campaign, and her outdoor access advocacy spans over a decade. On 16 September 2022, we recognised Jan Finlayson with an Outdoor Access Champion award for her significant and lasting contributions to outdoor public access in New Zealand.

“Outdoor access is essential to us as individuals and as a nation,” says Finlayson. “It’s health-giving for your mind and body – emotionally and socially. And collectively, perhaps now more than ever, it’s important to us because so much of our national sense of self has been fostered outdoors. It is where we meet nature on its terms. Nature is indifferent to postcode and politics. So, the outdoors is a great leveller. Better than anything else,” says Finlayson.

In 2011, Finlayson sat on the Canterbury Aoraki Conservation Board. “That’s where I cut my teeth on tenure reviews,” she says. Most recently, she completed three year-long terms as president of FMC.

Herenga ā Nuku chief executive Ric Cullinane recognises Finlayson’s impact as a leader in the outdoor community over the last decade. “She has fiercely defended the public’s right to access conservation land – including the protection of wild lands,” says Cullinane.

FMC's Same as SH1 campaign drew the public’s attention to the tens of thousands of kilometres of unformed legal roads that criss-cross our motu. Although unbuilt and often indistinguishable from adjacent land, the public has the same legal right to use these roads as they do formed roads. Finlayson describes these roads as a lifeblood for public access now and in the future.

“I would say that they’re insurance against sales of adjacent land to people who would rather shut the gate. The presence of a legal road keeps that gate open. The Same as SH1 campaign is simply to let the public know these are your roads, for you to use, and they have the same legal status as a state highway.”

Finlayson continues her land access advocacy, notably on the topics of stewardship reclassification of conservation land and crown pastoral land.