The Queen’s Chain calmly carries on but incomplete

When Queen Elizabeth died, many people asked how our daily life would change. Stuff noted that Queen’s Counsel would need to become King’s Counsel, coins with pictures of the Queen would slowly be replaced and passports would bear the name of the new King.

But one thing that won’t change is the Queen’s Chain. That’s because, legally, it doesn't exist. The term Queen’s Chain stems from a myth that among Queen Victoria's instructions to New Zealand Governor William Hobson in 1840 were orders to reserve such strips around the whole coast, lakes and rivers.

The term Queen’s Chain stems from a myth

So, for people who want to walk down, swim in, or fish in rivers, lakes or the beach, the answer is not always simple. The Queen did not guarantee a right of access to whenua that's beside water.

You're free to get your feet wet in most Crown-owned rivers. Photo: Abby Jago

If the river is owned by the Crown, then you're generally free to stand in it. There's not an automatic right of public access, but, so long as your public access is not in conflict with some other Crown use (such as a hydroelectric dam), then the Crown doesn’t mind you getting your feet wet.

Find out on our maps

Finding out who owns a river is not always simple. The best way to do so is to visit our online maps. If the relevant part of the river is entirely within a private land parcel, then it's probably private. If the river is designated as a ‘hydro area’ within the mapping system and is bounded on each side by public land, it's probably Crown-owned. 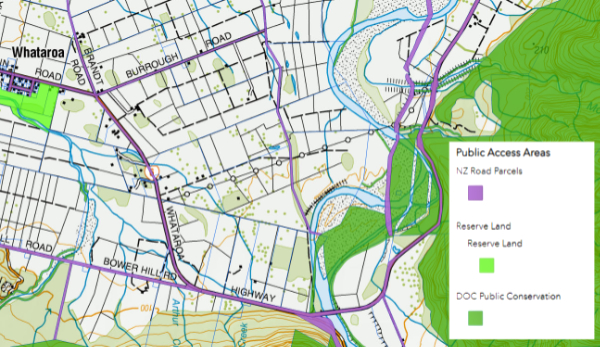 The bed of the lower reaches of the Whataroa River is largely Crown land and described as ‘hydro’. In some parts, it's accessible via unformed legal roads or public conservation land. But these don't move with the river's course, so where it has eroded into private land, both the bank and the bed of the river are only accessible with the landowner's permission. Explore more on our map.

This situation becomes more complicated over time because rivers have a habit of moving, eroding one side, and accreting on the other. Legal boundaries do not generally move, but sometimes they do move to follow the course of a river. For instance, public esplanade strips, often 20 m wide, that border a river will move with the river. But some other types of legal boundaries stay still even as the river accretes.

Yes, it’s complicated. Fish & Game has made life easier, identifying key river access points, but have a look at our maps to find out more (they include angler access points) or get in touch, and we’ll do our best to provide clarity about access for a specific site.