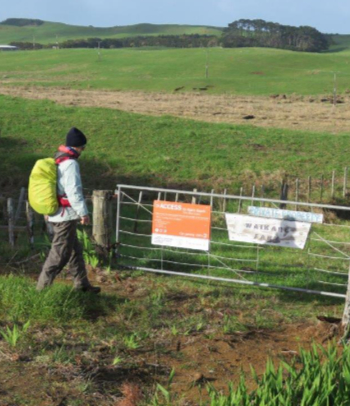 Last year, holidaymakers and locals were shocked to learn the Department of Conservation (DOC) had closed the 2.3-km track linking popular Kai Iwi Lakes with the wild, northern end of Ripiro Beach. Consequently, walkers in the area also lost access to a scenic track over Maunganui Bluff. There are few places recreationists can access the west coast, and now it seemed there was one less.

Kai Iwi Lakes is an attractive dune lake system, also known as Taharoa Domain, just 35km north of Dargaville. There are several campgrounds along the lakes’ shores, often busy with families and other visitors to the Kauri Coast. Ripiro Beach stretches over 100km – longer than the erroneously named Ninety Mile Beach.

Shortly after news of the closure broke in the Northern Advocate, Herenga ā Nuku Aotearoa, the Outdoor Access Commission, began to receive enquiries from upset groups and individuals who had been previously unaware of DOC’s plan.

Eight months earlier, in a November 2020 media release, DOC’s Operations Manager for the Kauri Coast had explained, “The track doesn’t meet DOC track safety standards due to surface issues which are difficult to resolve in the private section of track”. Most of the track was on private land, and DOC were reluctant to invest their limited resources in unsecured land. The story wasn’t shared among other media releases on DOC’s website and was picked up only by the Kaipara Lifestyler.

John Gardiner, Herenga ā Nuku’s regional field advisor for Northland, investigated the situation and began searching for alternative access. There was an unformed legal road in the area that looked promising – these roads are accessible to the public in the same way as other public roads but are usually undeveloped. However, it became clear that an adjoining landholder would not welcome any development of the road, so John sought other alternatives.

The Commission works across boundaries and in all kinds of partnerships; John is an ex-DOC employee and was already well connected to the different groups and organisations concerned. He teamed up with a representative of the Whangarei Tramping Club and spoke with the owners and manager of Kai Iwi Farm. The farm’s southern boundary lies next to the closed track and offered an excellent opportunity. The manager knew the old track to be very popular, and although the owners did not wish to secure a formal easement on their property, they were happy to allow access and the development of the track.

The Commission strives for certain, enduring, free and practical access to the outdoors, but as John explains:

"We're nimble enough to take advantage of opportunities when they present themselves. Rather than say there was no point putting money into it because we haven't got any guarantees, we decided it was good enough".

John advised the tramping club to apply for an Enhanced Access Grant from Herenga ā Nuku, which enabled them to purchase materials for six stiles and signage. Keen members of the club installed them, and the club has also generously agreed to maintain the track in the future. The western tip of the track traverses public conservation land, using the existing DOC track.

The new Kai Iwi Lakes Coastal Track, a stone’s throw from the old one, opened on 11 June this year (2022) with a ribbon cutting and celebratory group walk. No dogs are allowed on the track and, as with any track, walkers will need to use it respectfully and responsibly to ensure access is retained.

Note: John Gardiner is leaving the Commission in early 2023 after 12 years as regional field advisor for Northland. If you are interested in talking to him about his many different access stories, please get in touch.